I flew in from Santiago to the nearest airport in Calama (CJC). You can get a round-trip airport transfer with TransLicancabur for 20.000 CLP. The booking can be done in advance via email. I’m glad I went with this option since it was very convenient and I didn’t have any issues. They dropped me off at my hostel and picked me up with enough time to be on time for my departing flight (despite running a few minutes late for my pick-up).

Local transportation in San Pedro de Atacama is either by foot or bike when you’re in the tiny town. Getting to the natural attractions is generally done by tour bus or van.

Expect to pay for everything in cash, including tour packages. Most of the travel agencies will tell you they don’t accept credit cards and will cut you deals if you pay in cash. All of the park entrance fees are cash only as well.

There are ATMs around San Pedro de Atacama but I didn’t use any of them. I’d recommend getting cash in Santiago (if that’s where you’re coming from) to avoid high foreign ATM fees. The total amount of cash I brought with me was around 100.000 CLP (or $150 USD).

I stayed in a quaint hostel called Hostal La Ruca. Soledad (the receptionist) was very kind and welcoming. I reached out to her via email to talk about rates and she left me a bed for 12.000 CLP a night. I secured the reservation using Booking.com and we later settled the debts in person the night before my check-out.

For this trip, I tried to save my cash for tours and ate on the cheap.

San Pedro de Atacama is exhausting if you’re around for a long weekend. There are so many activities to take advantage of and I would recommend working in a day to just relax.

I did a bike ride on my second day in San Pedro de Atacama with a friend I made on the first tour I went on and I highly recommend it. Lots of fun and a great feat to attempt.

From San Pedro de Atacama, we found a bike rental shop called Turismo Teckara that lent us very nice Trek mountain bikes for 7.000 CLP for 6 hours. The rumor is that there is no penalty if you return the bikes later than 6 hours. 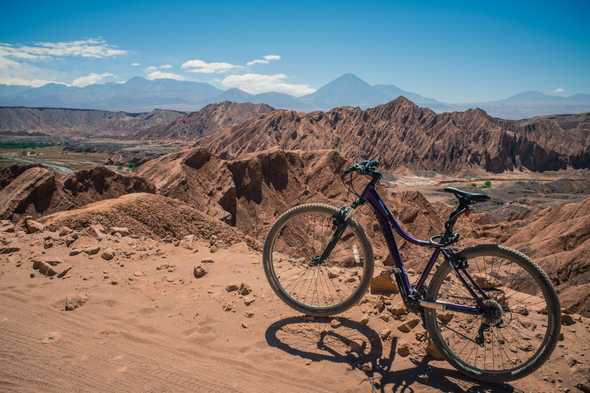 You can also rent bikes from Hostal Matty (next door) for 500 CLP less per bike but the purple trek is obviously superior.

We rode for approximately 20 minutes to reach Pucará de Quitor which are old ruins you can explore (with a fee), but this site was a rest stop for us and we continued on our way to Catarpe.

I am not going to lie, the loose sand, heat and incline up to the tunnel at Catarpe is tough. Make sure you pack a lot of water and prep yourself for a crazy ride back down! The view up there is great.

There are plenty of tours to pick from and many agencies to book at. It is not hard to find an agency that allows you to pay with credit card, but paying in cash will get you discounts. For the 4 days I was there I did the following tours with the corresponding agencies.

Booked a day before because of the early departure. The agency that ended up picking me up but everything seemed to be under control. Our guide was very knowledgeable and we visited several different sights and I liked her laid back approach to herding us around. En resumen, we visited Laguna Chaxa, Salar de Atacama, Laguna Miscanti y Miñique, Salar de Atacama, Piedras Rojas, and did quick stops at the poblados of Toconao and Socaire. None of the stops were alike in sights and weather! I recommend this to get a glimpse of a little bit of everything in one day but make sure you pack layers.

I had very low expectations when I read that breakfast and lunch were included. However, breakfast included slices of toasted French baguette from La Franchuteria in San Pedro de Atacama along with cheese, butter, jam, instant Nescafe, tea, fruit. I am not one for breakfast but I could not say no to good bread.

My expectations for lunch were ham and cheese sandwiches but I was extremely and pleasantly surprised when the tour guide laid out the lunch spread: A pesto pasta salad, pumpkin soup, cucumber and bell pepper quinoa salad, grilled chicken tenders, and more of the crack bread. 🍞 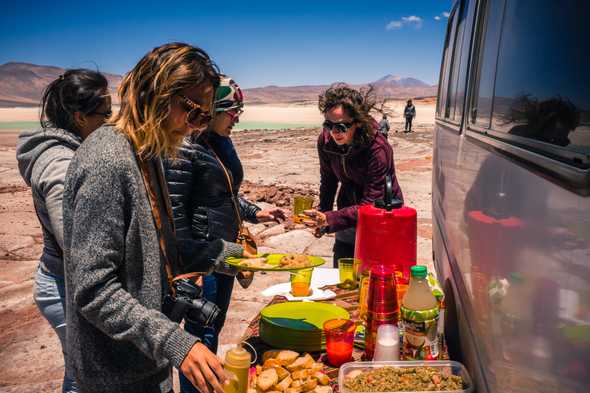 According to the guide, the food came from a restaurant near Hostal La Ruca called Jallalla. Thanks for the fantastic food coma, Paula! ❤️ 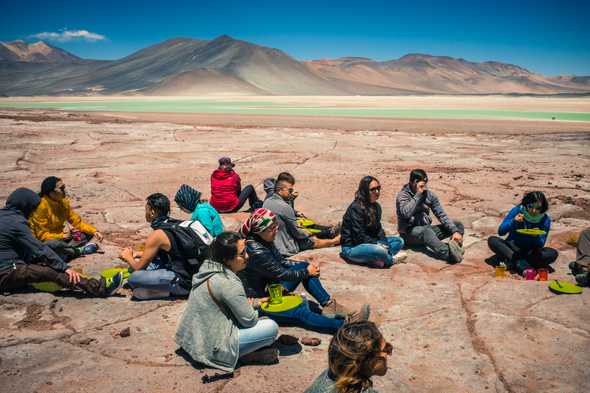 Reserved a day before but was not allowed to secure the spot by paying until the day of the tour. I later learned that this was to avoid refunds if the weather wasn’t suitable for the tour. Staring into the sky without any light pollution was mesmerizing. The tour was split into two parts. The first was a lecture and explanation of why we are able to see different constellations in other seasons or other parts of the globe as well as guided identification of constellations, planets, and satellites with the naked eye. The latter part was a circuit of looking into a several telescopes to get a closer view of stars, galaxies, and nebulae (both new an old). The tour included a choice of hot chocolate, herbal tea, black tea, or mate de coca.

This was a last minute booking that I felt lucky to have found (everyone else was booked and cash only). This was my favorite tour out of the rest by far. The guide was charming in his way of talking about what we were about to see along the trip. We covered a lot of ground by stopping at Mirador de Kari/Piedra del Coyote. 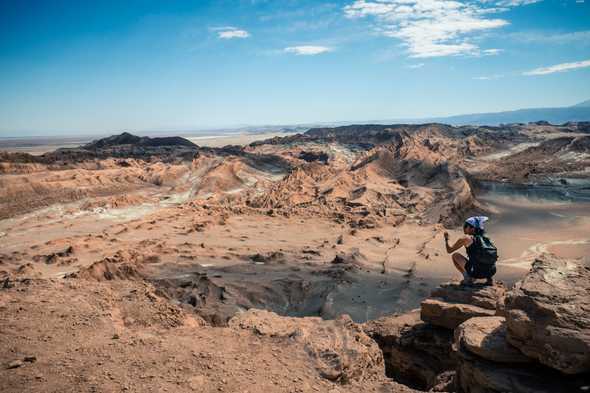 We also drove and trekked along a ridge where the wind began to pick up. Our ride would be waiting for us at the basin so we finally running down a sand dune to “survive” Valle de la Muerte and continue exploring the salt mountain range in Valle de la Luna.

Our final stop was walking up to the anfiteatro (amphitheater) in Valle de la Luna to watch a dramatic sunset.

If there’s anything you do in San Pedro de Atacama, do this.

I was very reluctant to try this one. I hate being cold. However, I came well prepared with snow pants, gloves, etc. I also had several conversations about this one with other travelers that finally convinced me to go. Reasons being:

So I did it, I saw it, I took a dip. Seeing the geysers as the sun is rising is a neat way to wake up. Make sure you pack some coffee or warm beverage. If you’re lucky and the sun is out, the cold won’t be as bad.

Bottom line: Would I do this one again? Probably not.

We stopped at Pueblo de Machuca along the way on our way back to San Pedro de Atacama and had the opportunity to buy llama kebabs and goat cheese empanadas (fried). 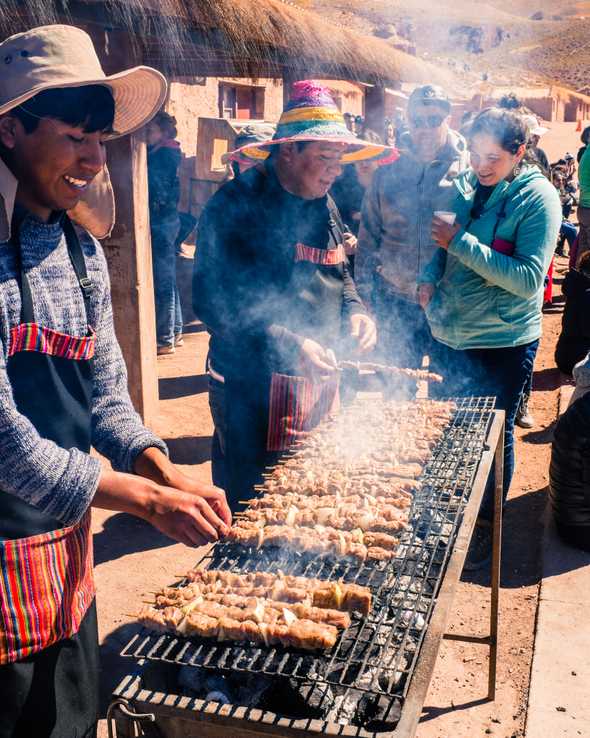 The scene was enough entertainment for me. I asked if the trumpet was to signal that the food would be out soon (a la sad trombone) but it was just to entertain the long line of hungry travelers. 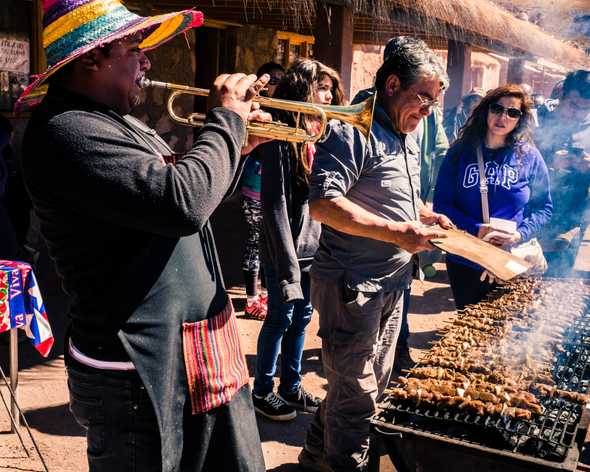 This was a last minute tour before an early flight back to Santiago the next morning. There was not much advertisement for it, I just happened to see a flyer on a post outside while I ate ice cream. The price was originally 25.000 CLP but the lack of interest from the general public encouraged the agency owner to cut a deal. No photos from this trek but it was a great opportunity to walk the Cavernas de Sal at night. There was a spooky story-telling twist to the trek and women dressed as witches to spook us along the way, but the real treat was looking up at the stars and hearing the salt crystals cracking as the temperature dropped and to cause them to contract. 😮